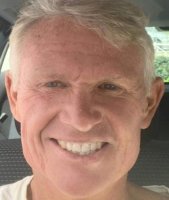 Owner of "Whitsunday Sailing School", Mal has over 36 years experience at sea. His career began in the fishing industry working trawlers in the Gulf of Carpentaria as an 18 year old. At 20 he signed on to be a seafood technologist based out of Auckland on a joint venture between Japan and New Zealand working Purse Seiners 210 ft long fishing vessels in the South Pacific.

It was while in New Zealand he took a real interest in sailing and when transferred to oversee a joint fishing project in Burma spent his spare time sailing on the waters around Thailand. He returned to Australia and enrolled in the Gold Coast Marine Academy where he spent five years studying to become a Yacht Master Ocean Instructor and Offshore Examiner after which he spent one year in the US studying navigation, big boat handling & advanced spinnaker techniques at the Dana Point Charter Yachts. While in Southern California he became involved with the Marine Heritage Society of Southern California and raced on classic yachts.

Mal returned to Australia and established the Whitsunday Marine Academy in 1992. In 2005 he was awarded the Master of Yachts Unlimited Power and Sail to 200 gross ton by the International Yacht Training facility in Florida. He was then endorsed as a professional instructor in both recreational and commercial qualifications.

During his career, he has owned or operated many boats most of them large maxis including the famous boats Maxi Ragamuffin, Siska, Hammer of Queensland, Condor, Freight Train and many others.

Mal is very well known throughout the Whitsundays and the sailing industry in general as a Master Sailor.

He has a passion for sailing and it is his ability to transfer that passion to his customers that have seen people come back time after time.